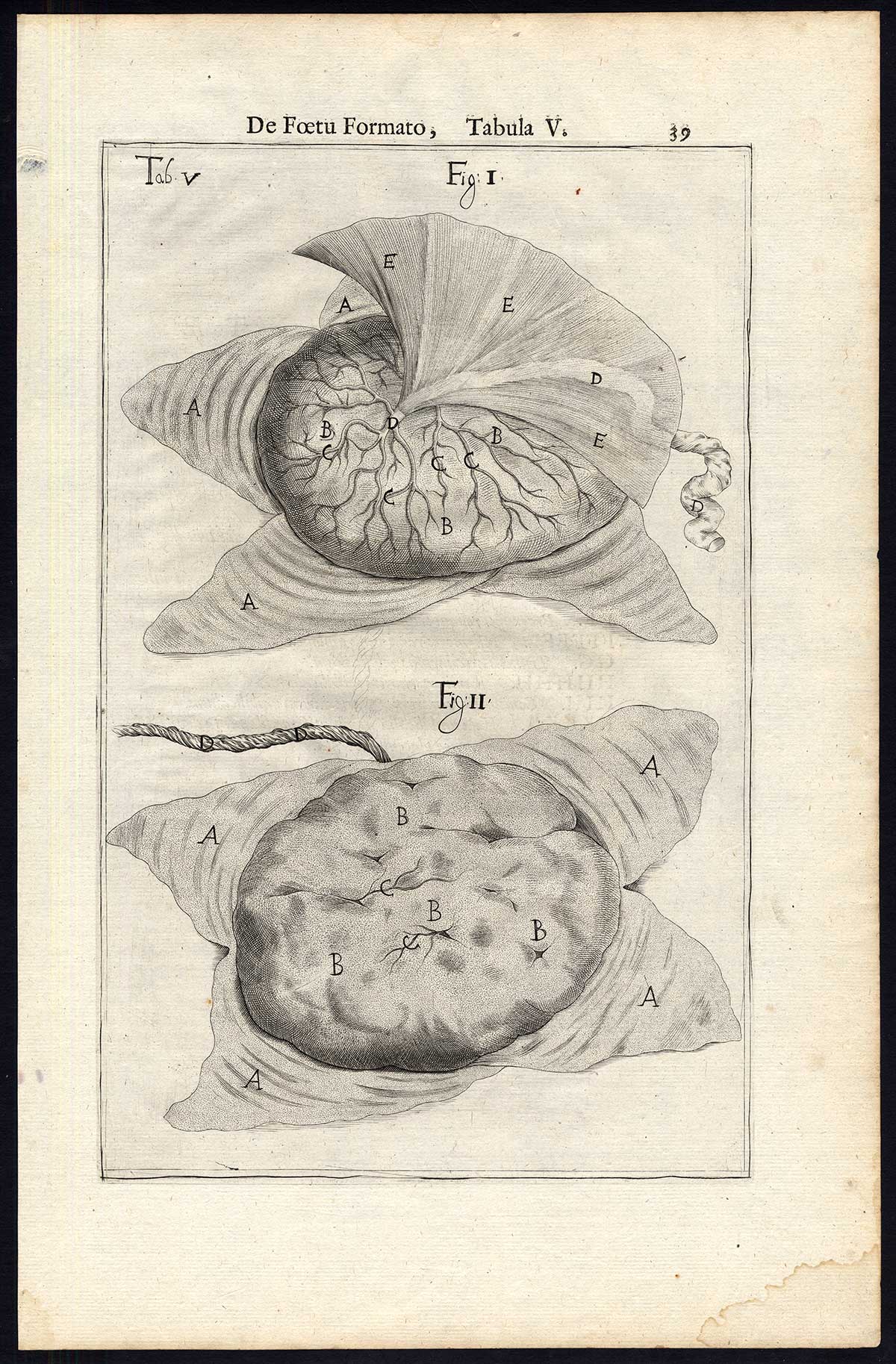 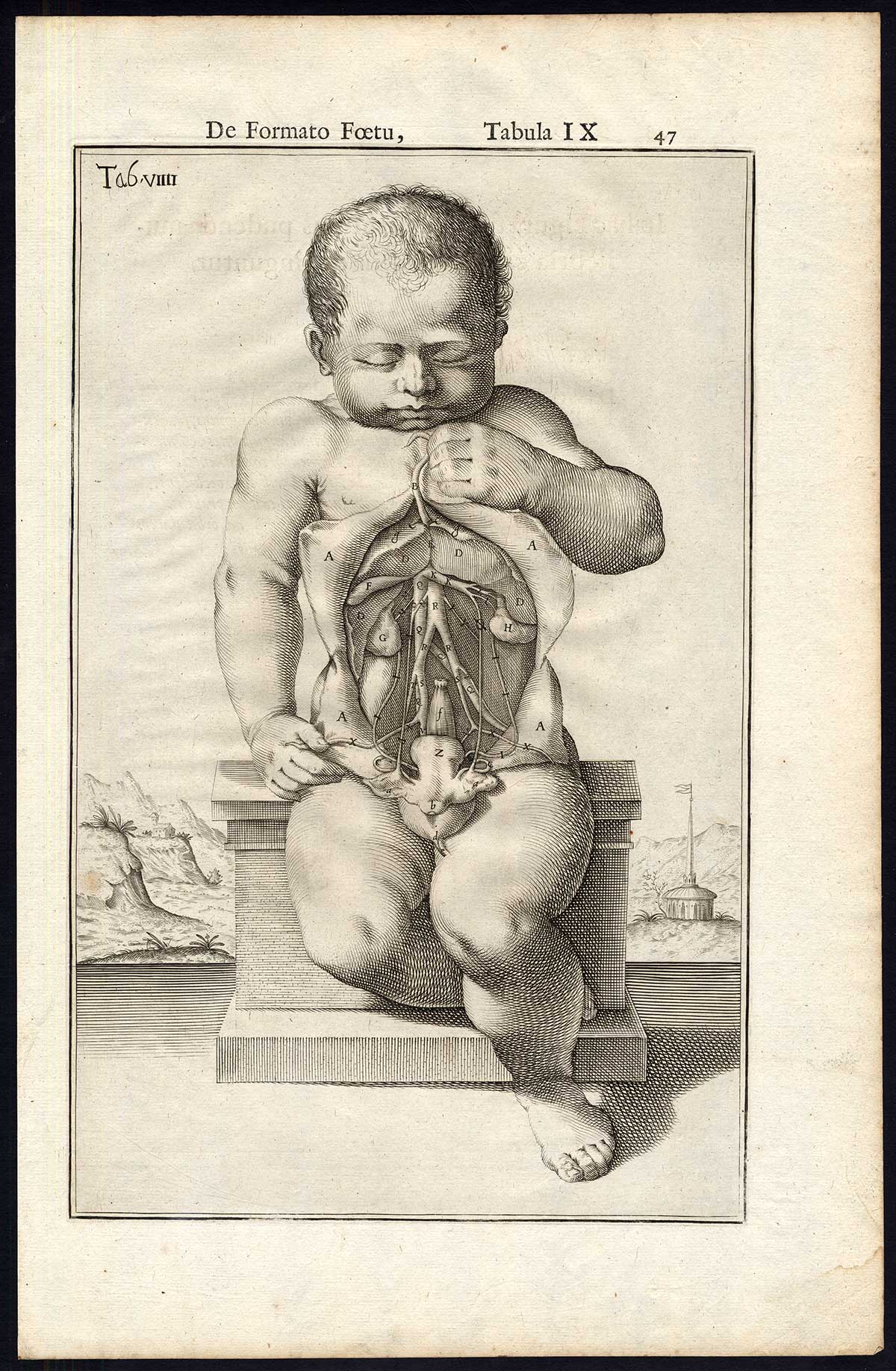 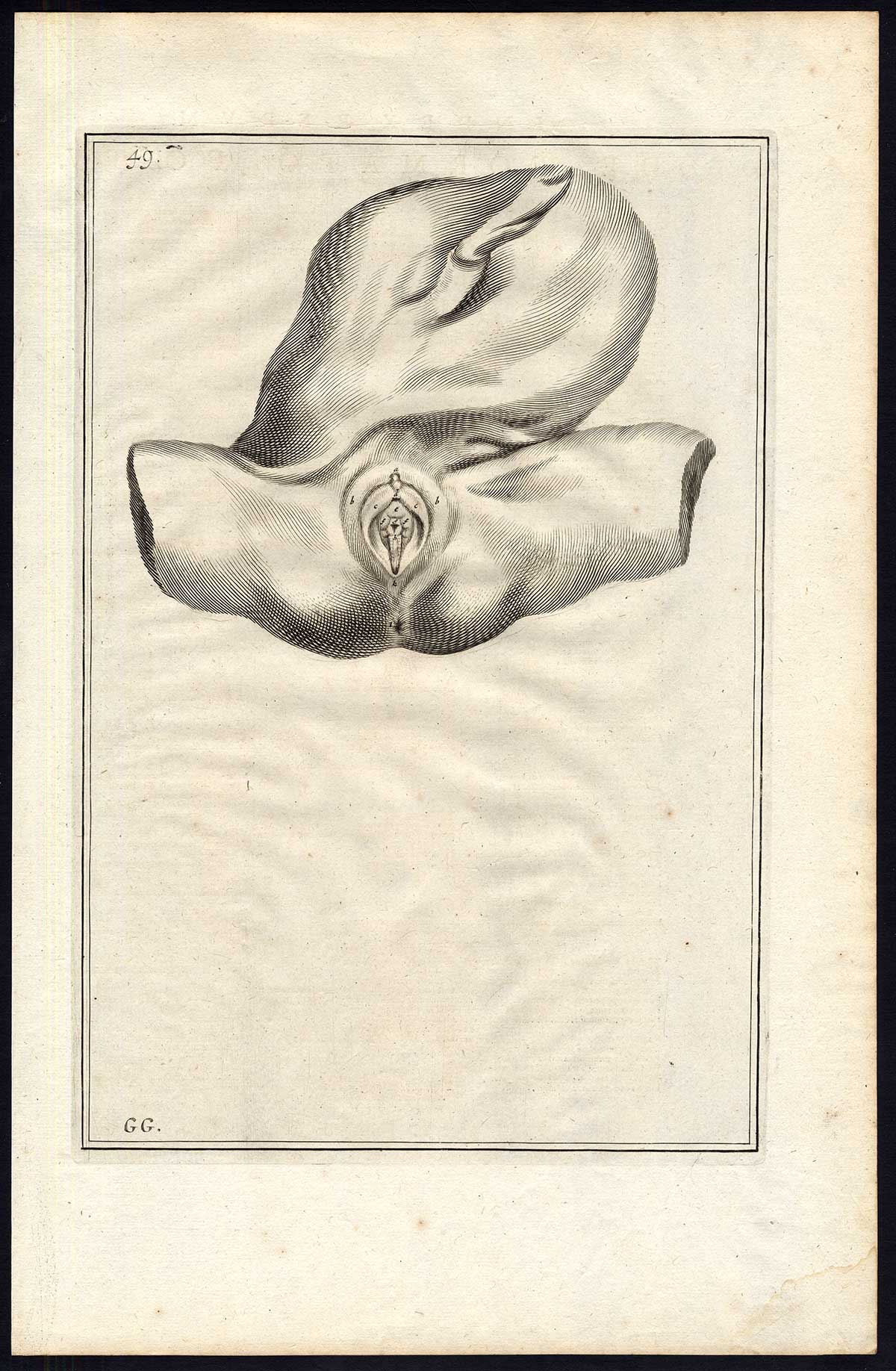 Subject: Very rare anatomical print. Plate, Tab. I-IX. Set of 10 plates and the complete section of the book titled "De Formato Foetu". This set of plates and text relates to pregnancy, reproduction and the growing of the foetus in the womb. The first four plates show standing women from the knee up, with their stomach opened, so the womb and foetus are displayed in layers. The following two plates detail the placenta. The three next plates are of the baby, one still connected to the placenta through the umbilical, the next two with opened abdominal cavity. The key to these plate(s) are on the rear of previous plate, as issued.
Condition: Very good, given age. General age-related toning and/or occasional light stains from handling. Please study scan carefully.
Medium: Copperplate engraving on a verge type handlaid paper.
Size (in cm): The overall size is ca. 27 x 42 cm. The image size is ca. 21 x 35 cm.
Size (in inch): The overall size is ca. 10.6 x 16.5 inch. The image size is ca. 8.3 x 13.8 inch.
Part Number: 35402
Location: E18-43
Description: This very fine engraving originates from 'Anatomica operum omnium' by Adrianus Spigelius (Adriaan van den Spiegel), published by J. Blaeu, Amsterdam 1645. This splendidly produced edition of Spigelius' Collected Works was edited by the Dutch physician, Johannes Antonides van der Linden. This folio volume is illustrated with 117 anatomical plates. 78 Of these plates originate from Casserius, intended to illustrate his 'Theatrum Anatomicum', a great anatomical atlas that was still unpublished at his death in 1616. The remainder of the plates was prepared by Bucretius. The complete set of plates is seen as the most important anatomical illustration of the post-Vesalian period, and among the finest produced in the seventeenth century. Since before 1600 Casserius had been working on a fully-illustrated anatomical treatise, which he hired Fialetti to illustrate. His "De Vocis" of 1601 concludes with a promise to publish a treatise on the anatomy of the whole human body with illustrations. However, at the time of his early death in 1616 Casserio left 86 spectacular anatomical drawings by Fialetti, and also possibly their engravings, but no text. Casserius and the co-author of this work, Adrian van der Spiegel, both studied under Fabricius ab Aquapendente (Fabrici) at the University of Padua. Both worked closely with their teacher for many years, and in 1608 Casserius succeeded Fabrici in Padua's chair of surgery and anatomy, which passed in turn to Spiegel upon Casserius' death in 1616. Spiegel (Spigelius) (1578-1625) wrote an unillustrated treatise on anatomy that remained unpublished during his lifetime; in his will he appointed Daniel Bucretius (ne Rindfleisch) to see the work into print. To illustrate Spiegel's treatise, Bucretius obtained 77 of Fialetti's original 86 anatomical plates from the heirs of Casserius (probably engraved by J. Maurer), and commissioned 20 more by Fialetti and engraved by Valesio to complete the series (the remaining 9 plates left by Casserius were used to illustrate Spiegel's De Formato Foetu [1626]), which are part of this work. In the complete series, the largest number of plates, forty-three - and these perhaps the most memorable - are to be found in Liber IV, on the muscles. There are also interesting illustrations on the genito-urinary system in Liber VIII and on the brain in Liber X-one of these, showing the arterial circle at the brain, predates the Willis-Wren illustration [from Willis's Cerebri Anatome (1664)]... Except for those few plates which were derived from Vesalius, the anatomists had reconsidered ways of presenting human anatomy. In doing so they produced the first original series of illustrations of the anatomy of the human body since Vesalius. *Ref: Roberts & Tomlinson: The Fabric of the Body, pp. 262-63; see also pp. 259-61; Cazort, Kornell, Roberts: The Ingenious Machine of Nature: Four Centuries of Art and Anatomy (1996) pp. 167-68; Choulant-Frank 225; Garrison-Morton 381; Heirs of Hippocrates 414; NLM/Krivatsy 2202; 11297 (citing Casserio's and Spiegel's works separately); Sappol, Dream Anatomy pp. 110-111, 113; Waller 9121 and 1812.

Artists and Engravers: Authors: Adriaan van den Spiegel, name sometimes written as Adrianus Spigelius (1578-1625) was a Flemish anatomist who was born in Brussels. For much of his career he practiced medicine in Padua, and is considered one of the great physicians associated with that city. He became professor of Anatomy in 1615, succeeding J. Casserius. At Padua he studied anatomy under Girolamo Fabrizio (1537-1619) and Julius Casserius (Giulio Casseri: 1552?1616). His best written work on anatomy is De humani corporis fabrica libri X tabulis aere icisis exornati which was published posthumously in 1627. He borrowed the title from De humani corporis fabrica, written by his fellow countryman, Vesalius, who had also studied in Padua. The book was intended as an update in medical thinking (a century later) about anatomy. In his 1624 treatise De semitertiana libri quatuor, he gives the first comprehensive description of malaria. Also an uncommon hernia of the abdominal wall that he first described is called a Spigelian hernia. Spiegel also did work as a botanist. The genus Spigelia which has six species, is named after him. Traditionally, the rhizome and roots of Spigelia marilandica were used as a cure for intestinal parasites. Julius Casserius (1561-1616): famous anatomist and surgeon, who studied at the famous University at Padus with the renowned Girolamo Fabrizzio, public lecturer in Padus from 1565. In later years Casseri achieved such fame as an anatomist that the universities of Parma and Turinnoffered him the chairs of anatomy. He, however, always refused because he was convinced he would succeed Fabrizio, the chair once helt by Vesalius. He succeeded him as professor of anatomy at Padua in 1604. He added, particularly, to the anatomical knowledge of the vocal and auditory organs, and was at work on his magnus opus, a large general anatomy, at the time of his death: Tabulae Anatomicae LXXIIX", first published posthumously in 1627 by Daniel Rindfleisch (Bucretius), a German physician who edited and published the work after Casserio's death. Artist: Odoardo Fialetti (1573-1638) was a late-Mannerist Italian painter and printmaker. Born in Bologna, Fialetti initially apprenticed with Giovanni Battista Cremonini, and later under Tintoretto, with whom he was a favorite. Fialetti painted some of the churches at Venice, where he settled in 1604 in preference to Bologna, in order to avoid competition from the Carracci. Fialetti also engraved and was the author of works on costume, the arts, and a treatise on anatomy for artists (1608). Engravers: J. Maurer, Valesio.